” I was born in The Netherlands, I was home schooled being only child, grew up with Shabbat and the Feasts learning everyday..”

..My life has been walking the path our heavenly Father wanted us to walk, fighting religion and in search to find Identity, its been challenging and I learned from mistakes, I learned not to trust people in everything they say, because in the end we are all Human, We change, And if its not about Him we Fail..

When I was 3 years I made a radical decision to be baptized and to choose to live according to our Fathers instructions.

From around that Time My mom and I started helping Refugees (mainly Christians) and regularly bringing them food from a Baker who gave us all the cakes and bread he had left. I spend a lot of time with Youth and Families in the refugee camps and was mixed in with the youth there, learned from different cultures from my Third till about my Thirteenth. We learned from them also the ”Middle Eastern Culture”(which comes close to Biblical culture) ,like respect for the Elderly and Hospitality, and more..

We had the opportunity to talk about Torah, and to see world through another pair of glasses, I also remember having someone from Iran live with us for 5 years, which was the time I started learning speaking English. (Homeschool was not started yet)

When I was 5 I visited Israel for the first time together with my Parents, It was a indescribable feeling seeing the land from the Bible in real life, from the time we landed and stepped out, I felt instantly Home.

When we went to Jerusalem I more than ever wished that I could stay. I remember playing around with children in the center and trying to talk with them with little bits of english. We went to visit several historical sites, included the Dead Sea.. Masada.. the Mount Of Olives where I did walk on a camel for a minute.

I still remember that I was 8 or 9 when we visited a building near Rotterdam and I heard a speech about the Two houses by Mike Clayton, I remember I found it very fascinating being very interested in this topic. No idea the meaning would be powerful later on.

Sadly having not much ”Elohim Fearing”  believers that where outside ”Church friends”, We started to write on community websites ( Yahspace.us (The Biggest, and certain ”sister websites”), I found people of my age and even as young as 9 (I was 10 at that time), and started corresponding with them in broken English (some of those who still are Friends), and found out they also walked alone, I started to focus more on writing outside my country and felt no longer connected to The Netherlands.

(Now lately after a lot of experiences a new period arrived.. while the Ruach Ha Kodesh is waking up people by themselves today, learning it was not about ”Us” But about His Revelation to the lost, and we being carriers living vessels.. I can only talk about His deeds and words to let Him wake up people because when we don’t (or do it in our own selfish act) We am worthless for His Kingdom. )

I started to have more interest about the World Economy or the World Powers after reading the book ”Fossilized Customs”(By Lew White).

So I went and searched after many different conspiracy Theories, and found out after a while that I was getting more distracted and was no longer focused on His word. So I stopped and gave up everything to Him and saw He had all things in his hand and started to feel comforted.

For a few years of listening to some Messianic Teachers and their studies (Including meeting a few in person), I discovered a lot of people where to much focused on the Teachers themselves instead of the Word or the Message. There where many arguments about statements and opinions these Teachers gave, steering up people against each other, and I broke contact with a few of them after some discussions.

I always had a great interest in everything about History and People and Battles fought,  I grew up with Chickens and started to study how they where communicating by their language with each other and tried to replicate them having some results, sometimes I would be watching the Chickens for 3 hours out of pure interest, and they where my friends when I felt lonely.

While living a simple lifestyle I was blessed to travel Cities and Country’s in Europe like the UK, Israel and the USA (I have been to Alaska), and Canada.

And so Life makes turns and corners.. But we live for today.. and Tomorrow will be another to make its way into the unknown. 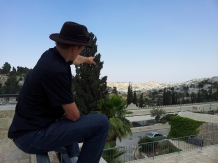